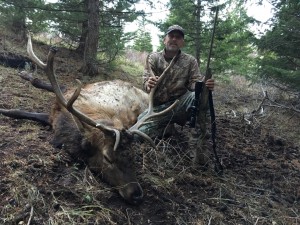 Justin Smith and his party did their first elk hunt with us in 2016. Justin has killed over 100 whitetails so when he called me and said he’d hit a bull at dark but hadn’t recovered it, I was pretty confident we’d find him. I met Justin before first light the next morning and after a short tracking job, Justin had his first Idaho bull, with no meat spoilage. And yes, he’d made a good shot, but bulls are not easy to kill! Justin and his party returned for the 2017 and 2018 season, filling five out of eight tags with branch antlered bulls.

Eddie White was part of the Justin Smith party. After one “warm-up” shot at a bull the previous day, he made good on this one! It was his first bull. 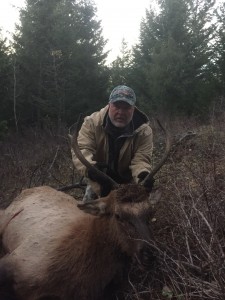 David also hunted with Justin Smith and took this bull on the 5th day. These guys went 100% success with us for 2016. 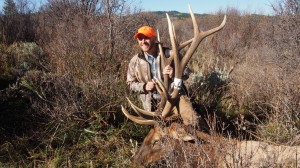 Ryan Mabie and his family hunted with us during the October rifle season in 2015. Four hunters took four bulls ranging from a raghorn to this good 6×6 Ryan took the last day. The elk don’t leave the ranch, so we are usually into them every day. 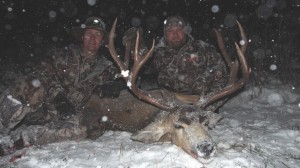 I’d scouted a good buck in the summer of 2014 and he was back in 2015. We hunted that buck from early archery season to the end of rifle season. With only a few days to go and in a horizontal snowstorm, we set an ambush in a brush-choked basin where I’d seen him before. With only a few minutes of legal shooting light left, he appeared for a quick second and my hunter, Ryan Avery made the shot. The buck was an 8×5 at over 29″ wide. 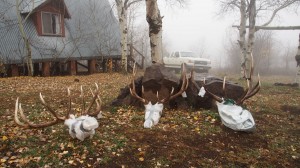 Three of the four bulls we killed in 2014, with the 4th bull being a 5 point. There were five hunters and everyone had a chance at a branch-antlered bull. 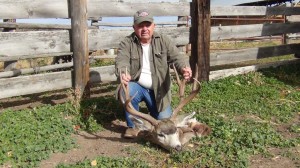 Daryl Munoz was back for 2014. We saw good bucks nearly every day but they were staying in the cover making a shot almost impossible. Daryl, always patient, set an ambush in an area with tangles of aspen and brush with only a few openings. At last light on the last night of the hunt, this good buck appeared at timber’s edge and dead-eye Daryl put one the boiler room! 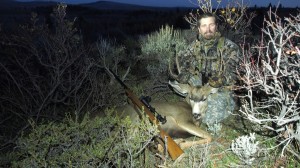 Kenny Johnson hunted with us in 2014. Once he knew the ranch, he preferred to hunt on his own and got a crack at this buck on the 4th evening. Kenny said this buck was with a much bigger buck but he bounded to safety before he could shoot.

Daryl Munoz has hunted with us for years.  In 2013, he killed this great 21″ Whitetail-only the second Whitetail we’ve ever seen on the ranches.  He made a great shot at 420 yards with his 30.06. 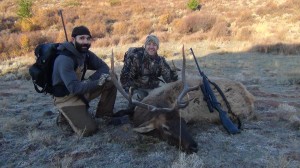 Ryan and Mike Mabie with Ryan’s 2013 bull taken on the ranch. 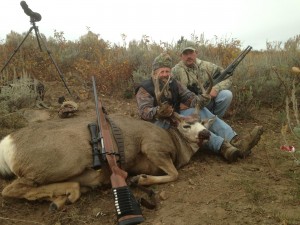 John Houston Sr. hunted with us in 2013 and took this buck.  John sent me a recent email that said, “Just want you to know it was the best hunt we have had in 20 years.  Everything was great.  Tyler and Matt were fun and worked hard.  Saw some good bucks and shot a couple of nice ones.  Guess you finally got a 100% kill with 3 good bucks.” 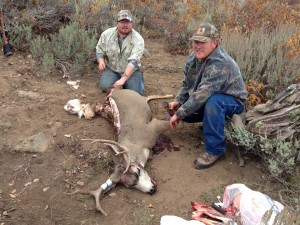 Guides, Tyler and Matt, help with everything! 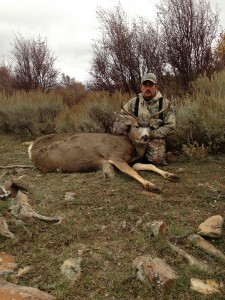 John Houston III took this buck at an incredible 700 yards in 2013 hunting with Tyler and Matt, our guides. 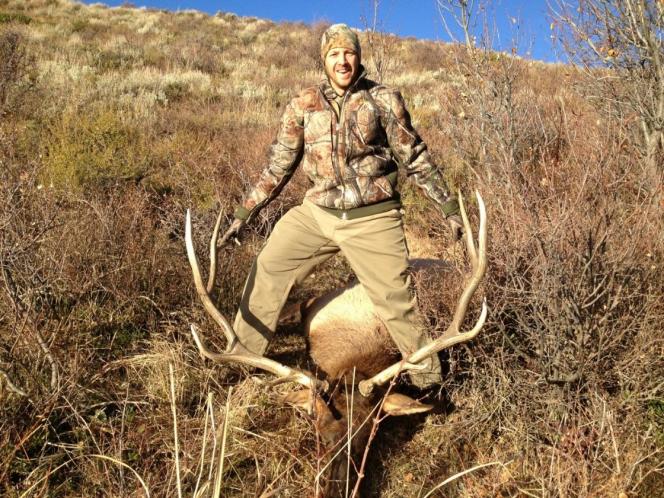 Ryan Mabie hunted with us in 2012 and killed a great bull during the October rifle season. The bull was 4-feet wide. 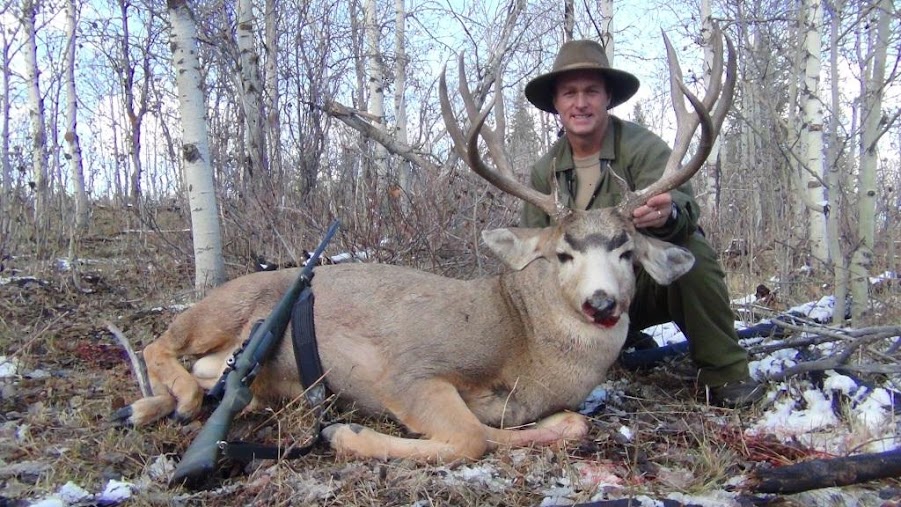 We killed this buck in October 2012. We scout bucks like this, and bigger, every year on our ranches

Tyler Williams, one of our guides, scouted some bulls in September, 2011 while guiding on the archery hunt. When rifle opened, he stationed Alan in the area. Opening morning he killed this good bull. That group went on to kill five branch-antlered bulls out of six hunters. 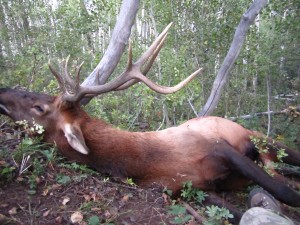 Here is one of the bulls Tyler guided during the archery season.  Out of two hunters, they had 100% shot opportunity and killed this bull. Tyler called in a herd bull, but the hunter misjudged the distance (no time to range) and shot under the bull. 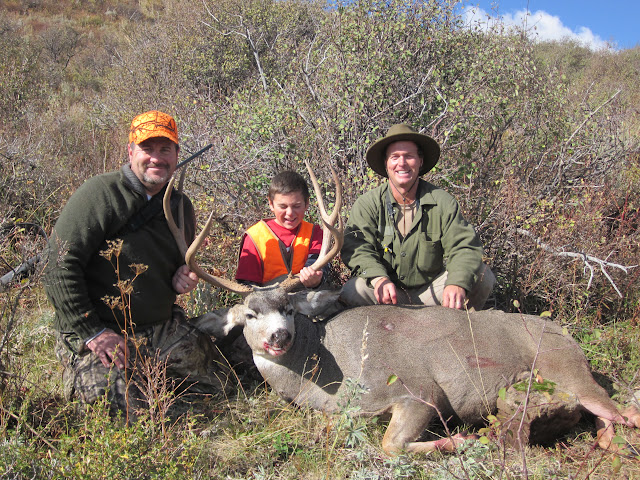 James Holman, his son, and Robby Denning- owner/operator of WeScout4u Inc. Robby had located a group of bucks in August and kept an eye on them all fall. October 12th, Robby was guiding James when he glassed up the group of bucks at a mile distant. It took an hour stalk to close the gap to 340 yards. James made the shot with his young son at his side. There was another buck in the bunch of the same quality, but the other hunters weren’t with us so he got away. 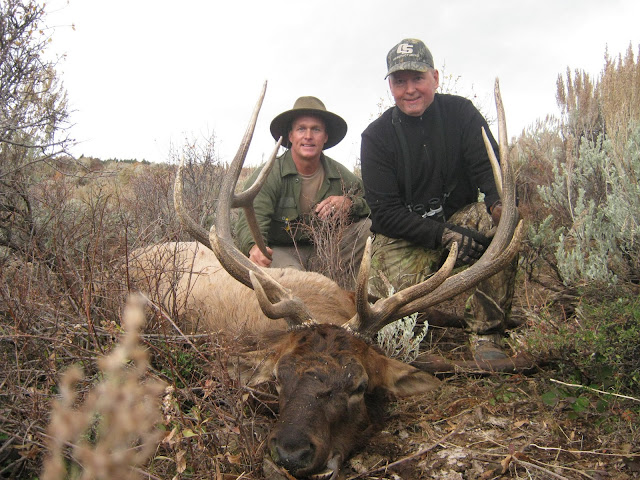 Craig Mabie of Michigan and owner/operator of WeScout4u Inc. Robby Denning with Craigs 2011 bull. Robby guided Craig on the last day of the rifle hunt to this great herd bull. Although they spotted the bull at over a mile, Craig eventually took him at a scant 50 yards! Robby said Craig’s trusty 30.06 hit like an Ultra-magnum at that distance!
The bull lab-aged at 5.5 years old. 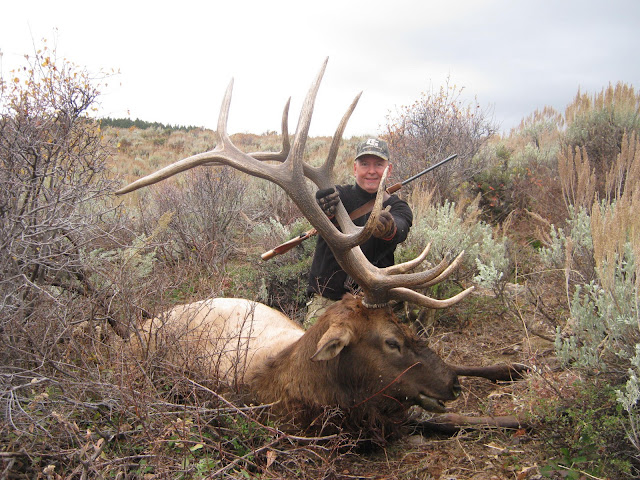 Craig’s 2011 bull taped out over 320″ and was very heavy. We see several bulls this size and bigger each year on our ranches. We’ve killed at least one every year since 2008 when our conservative mangement practices started to really take effect. 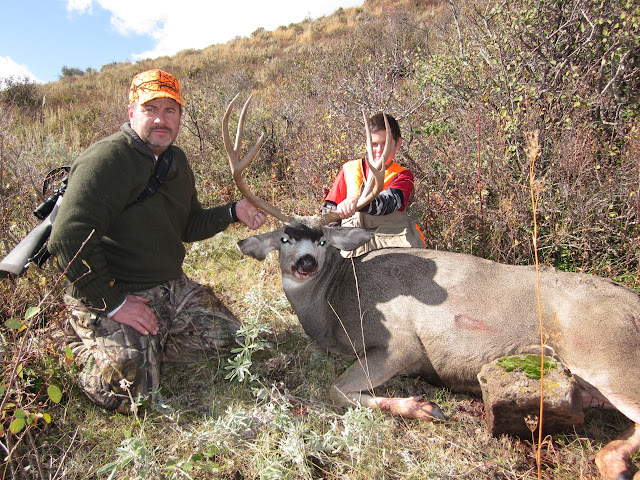 James and his son with another angle of James’ 2011 buck. Look at the body on that hog!  This buck lab-aged
at 3.5 years old- meaning he still had plenty of room to grow. 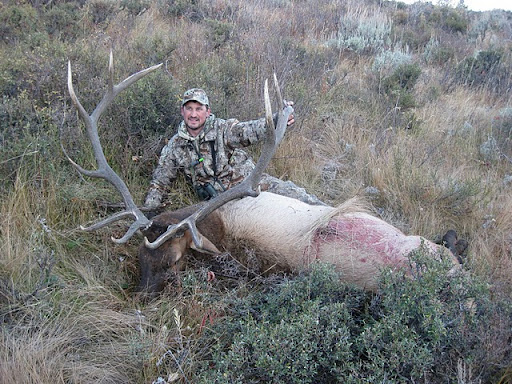 Our ranches offer some of the best over-the-counter bull elk hunting in Idaho. The success rate for rifle bull elk has never been below 50% and has been 100% on some years. The average success rate runs 70%. Bulls can go over 300″ with the average bull being a mature five point. Archery hunting bull elk during the rut is an incredible experience on the ranches with experienced archers approaching 100% success rates on bulls.

There are some good bucks on the ranch, too. However, unless you draw the late tag during the rut, all buck hunting occurs in October which is a tough time to hunt deer. Success runs between 30-100% on 4-point or better bucks. Some excellent mule deer bucks have been killed on this ranch over the years. If you’re lucky enough to draw the late buck hunt in unit 69, November 1st -30th, this ranch holds high potential for a top mule deer.  The October hunt is still a quality hunt with very few hunters on the ranch and the chance to spot-and-stalk without getting goofed up by another hunter.  I see 180″+ deer on the ranch almost yearly and have seen bucks to 200″ gross.

Staying at the cabin is a true Western hunting experience

This ranch has a cabin, a house trailer, and a developed campsite available to rent in addition to the trespass fee. The cabins and trailer have cooking facilities and either wood heat or gas heat and electricity except the cabin that is lit by lantern. We can hold up to 11 elk hunters and 11 deer hunters. Call for exact numbers which are determined each year. 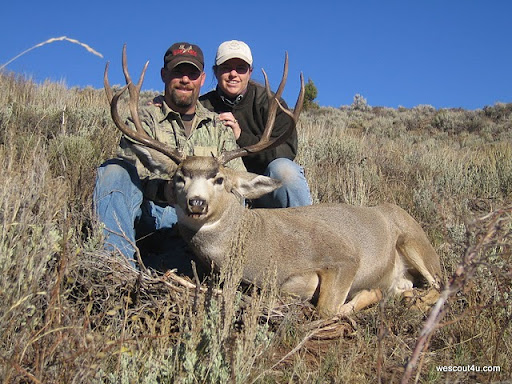 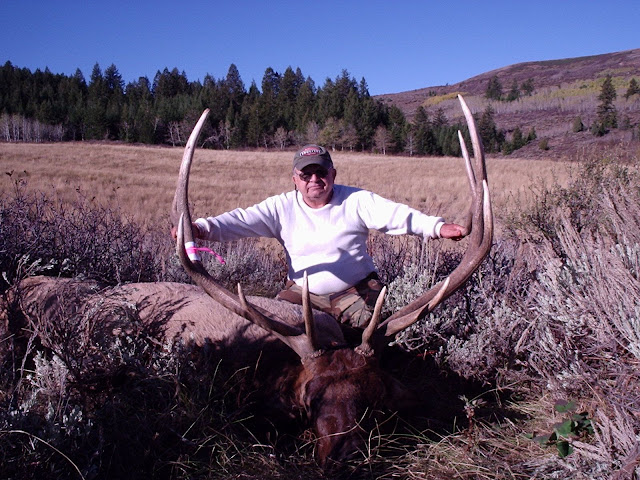 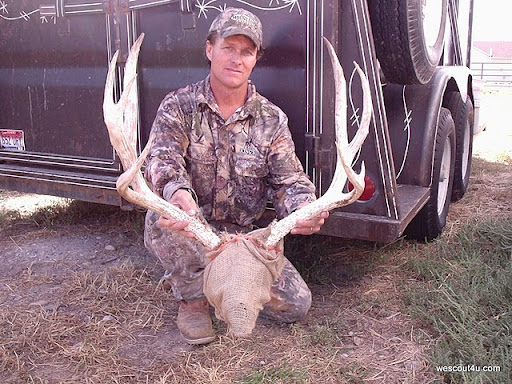 Because we manage hunting pressure, there are good bucks on all our ranches as shown by this 28″ buck from Willow Creek Ranch. Hunting is not easy, though, and you’ll work for any mature buck on our ranches because of the October dates, well away from the rut. 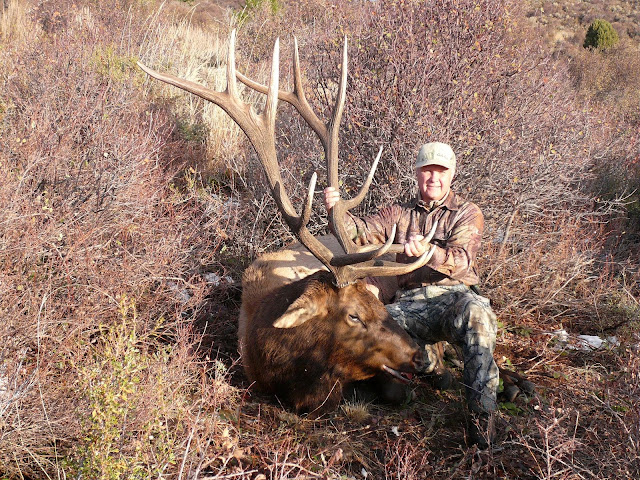 Stew Stone returned in 2008 to take this beautiful 330″ rifle bull on Willow Creek Ranch. Contact us at www.wescout4u.com! 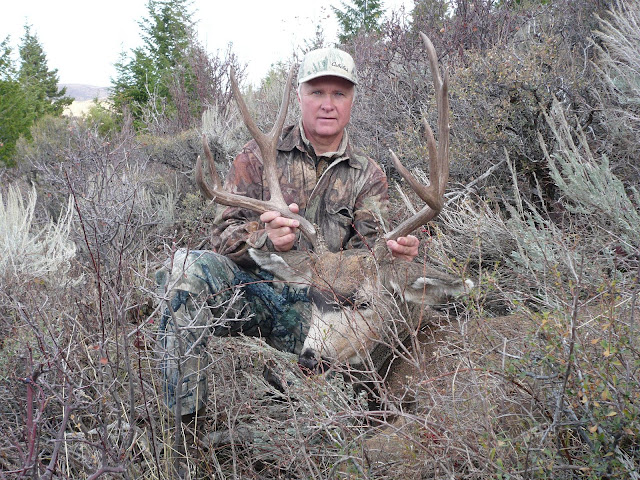 Stew Stone purchased a deer hunt to coincide with his elk hunt and took this good buck on Willow Creek Ranch in 2008, the day after he took the bull shown above. visit us at www.wescout4u.com!

Email us today to book your hunting package or quality location information.