Here are some recent photos from hunters Jim Carr has scouted for: 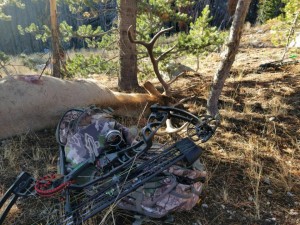 Jeff Weber’s 2016 bull. He contracted with Jim Carr for scouting. Looks like it paid off well.

Jim Carr scouted for Joe Wonderlich in 2016 and put him the area where he later took this nice bull.

Read what some of our other hunters have said about our services over the years:

“We filled out on all our buck tags.  Thanks Robby for the scouting package, it really helped us out.” Doug Runyon, October 2017

“In 2015, I purchased a scout package for my public land archery hunt. Jim Carr did an excellent job understanding the limitations of a solo hunt, and pointed me in the direction of elk I was capable of packing out. The pack-out was hell, the hunt was fantastic, and this option provided me enough info to get me started but still allowed me the joy of covering countless miles to find my own animals. I’d definitely do this again if I choose to hunt in unknown country. Thanks” -Greg Wright

“Robby, The scout package was everything you said and more.  The descriptions that came with the Scout package were precise.  We found multiple shooter bucks everyday. I will definitely use your services again. Thanks for the hard work,” Benji Burris, California, 2012.

“We’re happy with the two bulls we shot on Sheep Mountain Ranch in 2010, hopefully we’ll be back next year,”  Willard Beckman, Malcolm, Nebraska, 2010.

“We’ve hunted archery elk for over 20 years. Your Willow Creek Ranch is one of the best places we’ve seen for quality bulls. Although the big ones stayed out of range, we still went 4 for 4 on archery bulls- thanks!” – Tim Atkins, Chico, California, 2009.

“We had an especially good time elk hunting in the uncrowded conditions of the private land. It was a perfect hunt for my aging body. Killing a bull elk was the icing on the cake.” – Daryl Munoz, Henderson Nevada, 2002.

“Your private land  self-guided hunts fills a unique niche in the hunting industry giving self-guided hunters access to private land usually only available through fully-guided outfitter services costing thousands more than you do- thanks.” – Stuart Stone, Salem, OR. 2008”

“Thanks so much for finding those elk on that huge desert for us. You narrowed it way down and we killed two bulls with our bows the first time hunting the area. Thanks!” – Anthony Rowe, Boise, Idaho, 2008.

“The elk were exactly where you said they would be! We were the only camp in the drainage that had a bull on the meat pole, ” – Dr Ron Murray, Oroville, CA, 2002.

“We liked the area you guys scouted for us. We killed a bull and a buck and plan on returning for the 2009 season.” – Joe Newton, Bark River, Michigan, 2009.

…and a few dissatisfied hunters:

“We didn’t see any big bucks on that Willow Creek ranch, so how ’bout a reimbursement?” – Ed, Oregon, 2008.
(Well, Ed, even on private land with little hunting pressure, big bucks are hard to find. I’m sorry you weren’t successful- and as the agreement says, there are no refunds. Oh yea, we killed two good bucks after you left.)

“The information that you gave wasn’t as good as what we found after switching areas.” Fred L.  (FYI, Fred was drunk as a skunk when the scout met him in town to give him is map package.  Not sure he sobered up before switching areas.)

Email us today to book your hunting package or quality location information or call us at 208-525-8458!